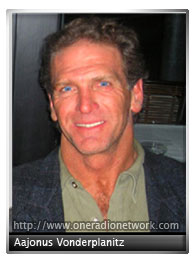 Aajonus Vonderplanitz born in 1947 is an American nutritional consultant, speaker, author, and raw food diet advocate residing in Malibu, California, and, as of 2008, has been eating an all-raw diet for 38 years. He developed the Primal Diet which is a diet consisting of fatty meats, organ meats, dairy, honey, minimal fruit and vegetable juices and coconut cream, all raw.

As a young adult Aajonus had 8 “incurable” diseases including blood & bone cancers, and Type I diabetes, and through personal experimentation, reversed his diseases through diet alone, and later helped 232 out of 242 people put their cancers in remission through diet alone which was confirmed by neuroscientist Dr. Elnora Van Winkle. He was featured on "Ripleys Believe It Or Not" TV program at July 17, 2002.
In 2001 he wrote the expert report that reversed Los Angeles Countys 38-year ban on Grade A raw dairy.

Aajonus has written two books: “We want to Live – The Primal Diet” and “The Recipe For Living Without Disease”. He is travelling constantly around the world and actually visits primitive cultures to explore diet and its relationship to health. Intriguing ideas hear on healing, digestion and what Aajonus says is the very best way to heal the thyroid and adrenals. Today Aajonus will join us LIVE from Asia.

Aajonus – How Supplements are Made

Interview with Aajonus about supplements

I was Near Death at 78 Pounds; The Only Thing That Saved My Life Was This Book…
More Posts